I Agree
How to Fight a Traffic Ticket in Oregon | OregonCourtRecords.us
Oregon Court Records

How to Fight a Traffic Ticket in Oregon

Oregon state law authorizes a police officer to issue a citation if they witness a traffic violation or crime within the state’s jurisdiction (ORS 810.410).. A typical citation in Oregon contains the violator’s physical characteristics, full name, license information, juvenile status, and issuance location. As the Oregon Judiciary conducts traffic case proceedings, the citation will also state the specific court with jurisdiction over the case. A recipient must report to the court if they wish to pay the fines or fight the traffic citation.

Records that are considered public may be accessible from some third-party websites. These websites often make searching simpler, as they are not limited by geographic location, and search engines on these sites may help when starting a search for specific or multiple records. To begin using such a search engine on a third-party or government website, interested parties usually must provide:

Is it Worth it To Fight a Traffic Ticket in Oregon?

It depends. In deciding whether to contest the traffic ticket, alleged offenders are advised to weigh the potential implications of paying the ticket. Some of these include having increased insurance rates and criminal records. And since state and federal laws afford every citizen equal right to a trial, why not avoid unsavory implications by at least fighting the ticket? After all, losing a traffic case does not change the statutory penalty associated with the violation. Some other factors to consider include:

Ways to Fight a Traffic Ticket in Oregon

Upon receiving a traffic citation, the individual must respond within ten (10) business days per ORS 810.436. Apart from containing the information mentioned earlier, the citation will also inform the recipient of where to enter a response. If he or she chooses to fight the ticket, the clerk’s office at the courthouse indicated on the ticket is where he or she must enter a plea. An arraignment follows a plea, after which the court shall schedule a hearing date. For violations, the hearing will hold before a judge; for traffic crimes, the hearing will occur before a jury of peers who will decide whether to convict or acquit the defendant.

After deciding to fight a ticket, the individual should waste no time deciding how he or she seeks to accomplish this based on his or her goals. At this stage, the two available options are self-representation and hiring an attorney.

Defendants who choose to self-represent or go pro se must inform the clerk of this decision and request official resources created for self-represented defendants. In self-representation, the individual assumes the role of attorney and defendant. He or she presents and cross-examines witnesses from both sides, submit relevant evidence, motions, and makes negotiations. It is very understandable if this seems too much for an individual without professional training and experience. More importantly, the self-represented defendant may not have enough time to prepare for the hearing. In this case, he or she must consider consulting or hiring an attorney.

Hiring an attorney is another way to fight a ticket—granted, this option is more expensive. However, the defendant who can show proof of financial hardship may apply for a court-appointed attorney or public defender for representation. The limitations of self-representation, such as the inability to file an appeal or make a good plea bargain with the prosecutor, make hiring an attorney worth it.

How to Fight a Traffic Ticket Without Going to Trial

If an offender opts to fight a ticket without going to trial, he or she may waive the right to trial by completing a declaration form obtained from the clerk of the circuit court. The procedure for this option varies from county to county (see the information and instructions for trial by declaration in Multnomah county circuit court). If the defendant submits the declaration form 24 hours before the hearing, the court will consider the completed declaration form the same as a court appearance.

Otherwise, the judge may interpret absence for hearing as contempt and rule against the defendant. The judge may also issue a bench warrant for his or her arrest. Meanwhile, another alternative is to arrive at a mutually agreeable plea deal with the prosecutor before the hearing. Here, the defendant accepts that he or she committed a traffic violation or crime. However, the prosecutor will downgrade the actual crime for a lesser offense with lighter sanctions.

How Do You Get a Traffic Ticket Reduced in Oregon?

Besides this, the individual may request that the court set up a payment plan to help the individual pay the ticket and other fees over a set period. The option is particularly suitable for defendants facing financial hardship. The court may also defer payment of the ticket until a later date.

Can You Get a Speeding Ticket Dismissed in Oregon?

What Happens if You Plead Guilty to a Traffic Ticket in Oregon?

Suffices to say, the offender will have to pay the ticket, bear any subsequent criminal and civil liability, and pay higher insurance premiums. Furthermore, the court and the state Driver and Motor Vehicle Services (DMV) may revoke an individual’s license if such an individual is a habitual violator.

More so, records of traffic crimes become part of the individual’s criminal record. Per the Oregon Public Record Acts, these records are available to interested members of the public, including prospective employers and government agencies.

How to Find a Traffic Ticket Attorney in Oregon

Given how important an attorney’s roles are in the favorable adjudication, reduction, or dismissal of the traffic ticket, finding a traffic attorney in Oregon is not a trivial matter. The best way to find an attorney is through close friends and family members who have received legal aid from the attorney. Otherwise, traffic litigants must use a trusted source to find an attorney. 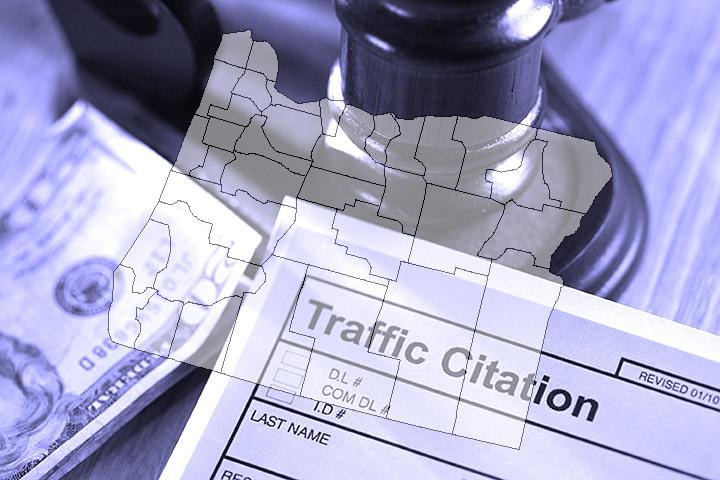