What are Oregon Family Court Records?

Oregon family court records refer to all official documents relating to family court cases and the litigation processes of family courts in the State of Oregon. This includes all records containing information regarding family-related disputes heard by various Oregon family courts as well as details of court proceedings including court actions, motions, opinions and decisions all presented in the course of a hearing. As per Oregon state laws, family court records are maintained and disseminated by designated record custodians and may be made available to interested and eligible members of the public. However, the eligibility requirements for accessing these records generally varies depending on the record of interest and its custodian.

What Cases are Heard by Oregon Family Courts?

Each of Oregon’s 36 counties has a circuit court that serves as a trial court of general jurisdiction attending to both criminal and civil matters. Oregon family courts operate as divisions of the state’s circuit courts as courts of limited jurisdiction. They specialize in cases pertaining to domestic matters. As per Oregon state laws, these courts have jurisdiction over cases such as:

Given that family courts operate as a division of the Oregon circuit courts, family court records are generated and disseminated by the office of the circuit court clerk in the state’s judicial district. Where the verdict of a family court case is appealed at a higher court such as Oregon’s Court of Appeals or the state Supreme Court, the record of the said case (including any revisions made to the original judgment) is likely to also be maintained by the appellate court which reviewed the verdict.

What is Included in Oregon Family Court Records?

As provided by Oregon state laws, the state judiciary provides public access to most family court records. This includes all records which are deemed public as defined in ORS 192.345 and 192.355. Interested members of the public may view or obtain copies of family court records using any of the state-operated channels. Records that are available to the public include general court case information and details of the court proceedings, including court actions and motions, judgments and financial settlements. However, the following records are restricted:

As per Oregon state laws, confidential records may only be accessed by persons who meet the state’s eligibility requirements for obtaining restricted records. This includes the subject(s) of the record and persons who have the legal authority to access sealed records—i.e. a court order/ subpoena.

How Do I Get Family Court Records in Oregon?

Interested members of the public may view/copy family court records managed by the offices within the Oregon state judiciary following the provisions of the state’s public record laws. While record retrieval processes are often unique to the judicial district in which the record is maintained. Records can be obtained using the state-operated online resources or by querying the office of the clerk of courts in the courthouse where the case was filed or heard. These are the three most popular channels through which family court records can be retrieved:

Oregon family court records can be retrieved online using the state-operated resources or aggregate sites managed by authorized third-parties. While there are online repositories managed by the state’s various judicial districts, the Oregon Judicial Department operates a website which offers centralized access to state-wide family court records. The resources available on the website includes OJCIN OnLine which encompasses the services provided by Access OECI and Access ACMS, as well as OJD eFile & Appellate eFile.

The Oregon eCourt Case Information Network and the Appellate Case Management System (OECI and ACMS) allows interested persons to access family court records from the state circuit and appellate courts. These are subscription-based resources and as such, require users to open an OJCIN subscription account in order to be issued unique login information with which to access the OECI or ACMS. To sign up, users must view and notarize the Terms of Use Agreement and a New Customer Information Form. These documents must be submitted along with a set-up fee of $150 and sent to the Oregon Judicial Department at 1163 State Street, Salem, Oregon. Alternatively, the documents can be mailed to ojcin.online@ojd.state.or.us while the fee can be paid using the OJCIN electronic payment system.

Upon completing the signup process, users are assigned unique login information with which they access OECI to retrieve family court records managed by Oregon circuit courts or the ACMS which primarily houses records maintained by the state appellate courts.

Family Court Records can include marriage records and divorce records. These records contain personal information of those involved and their maintenance is critical should anyone involved wish to make changes. Because of this both marriage and Oregon divorce records can be considered more difficult to locate and obtain than other public records, and may not be available through government sources or third party public record websites.

Free records do not truly exist, though many are inexpensive, though may be difficult to search for. Interested persons may access family court records using the online records search tool featured on the Oregon Judicial Department website. Generally, the records accessible using this register, excludes confidential or authenticated records even though the records provided are public information that can be used for a variety of functions.

Record searches conducted using the Smart Search Tool requires that the requesting party furnish the tool with any required search criteria. The required criteria include the case file number and/or the full name of the subjects. Search results include limited case information, including the identifying information of the parties involved, details of court actions, motions, motion arguments, and the court’s final verdict. Full court case information can be accessed by making in-person queries to the courthouse or subscribing to OJCIN Online.

In addition to the above, publicly available records are accessible from some third-party websites. These websites offer the benefit of not being limited by geographical record availability and can often serve as a starting point when researching a specific or multiple records. To find a record using the search engines on these sites, interested parties must provide:

How to Make in-person Requests for Oregon Family Records

In-person court record requests are especially recommended for persons seeking un-restricted access to court case information. These requests are to be made to the record custodian in the courthouse where the case was heard. All requests may proceed thus:

Oregon family court records primarily generated and disseminated by various court clerks of the state circuit and appellate courts. To request a record in person, the requesting party must verify the judicial district and the court in which the hearing took place.

This can be determined by the most current status of the case. If a verdict has been issued, the record is typically in the custody of the circuit court clerk, and where the judgment has been appealed to a higher court, the record is updated and maintained by the appellate court. Oregon court clerks can be located using the OJB Find A Court Tool.

Most judicial districts are operated uniquely and as such have distinct record retrieval requirements. These specificities notwithstanding, requestors are usually required to provide any information needed to facilitate record searches. This includes the full name of the parties involved, the case file number, docket number or appellate file number of the record. In addition, the requesting party may be required to present information regarding the suit as well as the and the names of either or both the legal representatives of the parties.

While requestors are often allowed to self-serve using public access terminals available in the state’s courthouses, record searches requiring the expertise or authorization of court staff often require that the requester schedule their visit to the courthouse beforehand. All in-person requests must be made during official working hours. Otherwise, the requesting party may be provided with a request form on which they will be required to indicate the desired record along with other relevant information.

In addition to record search criteria, requestors may be required to present a government-issued photo ID to confirm their eligibility to access a record. Persons requesting confidential or sealed records also require a court order/subpoena authorizing their access to the record of interest. Where a government-issued ID is not available, other forms of identification may be accessible. However, this should be confirmed while scheduling the courthouse visit. Generally, the requesting party is charged a standard search or copy fee depending on the record requested and copies required.

How to Access Oregon Family Court Records via Mail

Interested members of the public may also request family court records via U.S. mail. The requirements for obtaining these records generally varies depending on the record custodian or case type. However, requestors are generally required to prepare a written request which should contain the following:

In some cases, additional requirements may be demanded from the requestor. Thus, requesters are advised to contact the court clerk’s office for information before preparing any written requests. Requestors may also be required to provide stamped, self-addressed envelopes as well as a cheque or money order payment to cover any applicable fees, and photocopy of the requestor’s government-issued ID.

Both government websites and organizations may offer divorce and marriage records. Similarly, third party public record websites can also provide these types of records. But because third party organizations are not operated or sponsored by the government, record availability may vary. Further, marriage and divorce records are considered highly private and are often sealed, meaning availability of these types of records cannot be guaranteed.

In addition to court records, Oregon Family Courts maintain a variety of court decrees and documents/. These documents serve as official proof of court-issued rights and decrees including annulment, separation, and divorce, alimony and child support, adoption and child custody as well as authorization for will and trust fund execution. Some of these documents may be made available to interested and eligible persons.

How to Obtain Oregon Adoption Records

The Oregon Adoption Search and Registry Program is tasked with maintaining records of adoptions finalized in Oregon. According to state statutes, selected persons (involved in an adoption) may receive adoption-related documents upon request. 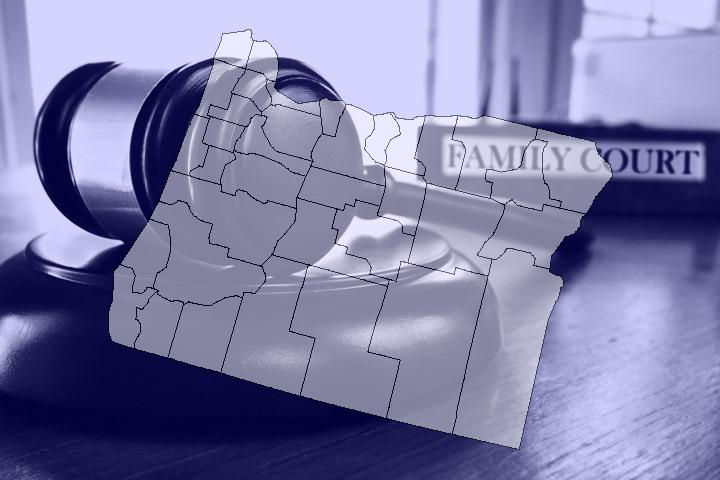