What are Oregon Small Claims Cases and Class Action Lawsuits?

Small claims cases and class action lawsuits in Oregon are civil cases filed to claim money damages or personal properties valued at $10,000 or less. While small claims cases are usually straightforward and uncomplicated, class action lawsuits are not generally without their complexities. This is because they typically involve multiple plaintiffs and a defending larger entity.

Small claims cases are conducted less formally than other matters in the Oregon State courts. They are addressed in the small claims division of the circuit court or the justice court, sometimes called the “people’s court.” These limited jurisdiction courts are only authorized to award money or recover personal property valued at $10,000 or less. The courts proceeding regarding these cases are guided by Title 5 of the Oregon Rules of Civil Procedure.

What is a Class Action Lawsuit in Oregon?

A class-action lawsuit in Oregon is a legal action filed by multiple individuals in a group against a single defendant. It provides the group of affected or wronged individuals the opportunity to receive compensation for the damages or losses incurred due to the defendant’s actions.

They are typically filed against entities such as employers, retailers, government, financial institutions, for actions associated with discrimination or unlawful employment practices, amongst others. Unlike small claims cases, for a class-action lawsuit to proceed in the state, the court judge has to certify it. As a result, it is not usually as straightforward or simple as single party small claims cases.

How do I File a Claim in an Oregon Small Claims Court?

Before filing a small claims case in court, a plaintiff must note that there is a limited amount of time to file the claim. This implies that the individual has to file the case within the statute of limitations period that applies to the case. In Oregon, the statute of limitations for contract and property damages is six years, and two years for cases relating to personal injury.

Any case filed after the statute of limitations passes will not be acknowledged in the court of law.

In this form, the plaintiff must state and prove the actual losses incurred. The court mandates that rough estimates are invalid, especially in cases involving money damages.

The plaintiff must endeavor to name all defendants wholly and correctly using their full formal names and addresses. If the defendant is a legal corporation or business, the plaintiff must also name the Registered Agent. This information is obtainable by contacting the Oregon Corporation Division at (503) 986 –2200.

Plaintiffs that cannot afford the filing fees can contact the local court clerk for details of how to have the fees deferred or waived.

Serving the other party

After paying the fees and the claim is officially filed, the plaintiff must notify the other party. The court clerk will provide a copy of the filed suit and a response form to be served on the defendant. The defendant can be served via:

For the case to proceed after service, the original proof of service must be filed with the court and all other required documents.

If the defendant fails to respond within 14 days, the court may grant a default judgment that favors the plaintiff’s claims.

The plaintiff also has the option of appealing the case if the judgment is unsatisfactory. If the case was heard in a circuit court, it is unappealable, unless it was heard in a justice court. The individual will be required to file the appeal within ten days of the entry of judgment.

Regardless, it is essential to first seek alternative ways to settle a small claims issue before filing a court case. This is because, when plaintiffs file their claims with the court, they are asked to sign a sworn statement called an affidavit that states that they made “bona fide” efforts to collect on the claim. Also, settling such cases out of court is less expensive, quicker and less complicated.

Do I Need a Small Claims Lawyer?

Legal assistance is significant in a small claims court case. The legal advice may assist a party in building a solid case, gathering admissible evidence, and collecting judgment. However, in Oregon, a small claims lawyer can only provide legal assistance and not legal representation. Individuals can only have lawyers to represent them with the permission of the court judge.

How do Class Action Lawsuits Work in Oregon?

One or more plaintiffs usually initiate a class-action lawsuit in Oregon on behalf of a large group of people that have one or more legal claims in common. It is a means through which people or employees combat the actions of larger corporations and entities. Most class-action lawsuits in the state are associated with issues concerning failure to pay minimum wage, underpayment of wages, unlawful pay deductions, etc.

Before prosecuting a case as a class action in Oregon, specific conditions of the Oregon Class Action Statute (ORCP 32) must be met:

Is a Class Action Better Than a Single Party Suit?

Class action lawsuits in Oregon cannot be used in all cases, and single party suits might also not be advisable for all claims. Class action lawsuits are usually the superior choice in cases where individual claims are relatively small and difficult to litigate. It empowers individuals who have no means of pursuing their individual cases on their own. For example, in cases where pursuing an individual claim is expensive, prosecuting the case as a class action allows all members or plaintiffs to split the costs equally and afford adequate representation in court. Joining these cases of similar claims together in a class action makes a solid case that the court and defendant cannot overlook. Notwithstanding, it is imperative to seek expert legal advice on how best to pursue a claim before deciding on a class action or single party suit.

Records that are considered public may be accessible from some third-party websites. These websites often make searching more straightforward, as they are not limited by geographic location, and search engines on these sites may help when starting a search for a specific or multiple records. To begin using such a search engine on a third-party or government website, interested parties usually must provide:

Third-party sites are independent of government sources and are not sponsored by these government agencies. Because of this, record availability on third-party websites may vary.

What Cases are Heard by Small Claims Courts in Oregon?

Cases addressed by the small claims division of Oregon circuit court and justice courts are issues with up to $10,000 in dispute. These matters are usually associated with money damage matters involving collecting bad debt, property damage matters, and breach of contract disputes.

Some of the cases addressed in the small claims court include: 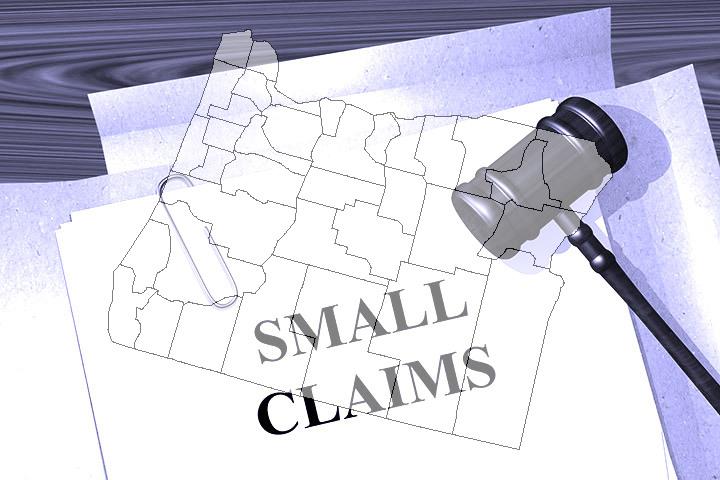